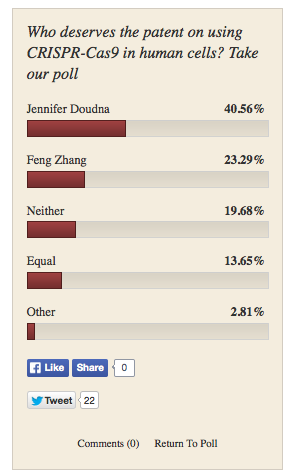 With more than 250 votes cast, Jennifer Doudna is leading by a decisive margin in a poll asking who deserves the patent for use of CRISPR-Cas9 as a tool. Feng Zhang got only just over half the votes of Doudna. Another take home message from this poll is that a sizable minority–almost one in five– said neither should have a patent on this technology. Geographically the results were fairly consistent across countries, but notably in the UK the top response was, “Neither”. This poll is …Read More