Many of us scientists, ethicists, and legal scholars are working on educational outreach to the public on the potential use of gene editing technologies like CRISPR to genetically modify human beings, but clearly there’s a long way to go and much more to do on this front. By the way, you may find this new 2020 post we’ve done on the intersection of CRISPR gene editing and stem cells to be a useful read.

The future use of CRISPR to edit the human genome in a heritable manner could be imminent or many years away, but clearly there is a move in that direction technologically and there are advocates of human modification such as some transhumanists and ethicists.

How does the public feel about all this?

A new Hart Research poll, “Public Attitudes Regarding New Technology for Editing DNA” provides a fresh look at public opinion. About six months ago, Pew did polling that suggested the public in the US was equally split on the idea of using genetic modification to try to prevent/cure genetic diseases, but there was strong opposition to the use for enhancement (e.g. designer babies). That poll also did not include the context of the concerns that have arisen in the last 4-5 months.

The new Hart poll is notable not only for its freshness (conducted May 14-17, 2015), but also for specifically talking about new technology, heritability, and asking about a potential moratorium. 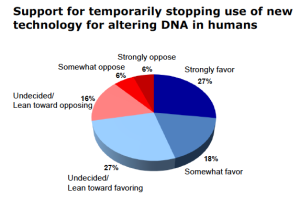 Most people who took the poll were of mixed feelings, which I think makes good sense given that there’s not a lot of information out there on this yet for the public and there are both up and downsides to this technology.

Even when the pollsters pushed the “not sure” folks to include leaners, the respondents were still mostly of mixed opinions. Interestingly, this mixed sentiment overall reflects my sense of what many of us scientists are feeling too.

When asked about a moratorium on clinical use in humans, people answering the poll were generally supportive of a moratorium, which I think also is good common sense. There is a kind of “let’s hold off on taking this drastic step of genetically modifying people until we all can learn more and get more clarity” sentiment.

It’s not clear what the public feels about genetic modification of human embryos in the lab only with no clinical component.

This polling reinforces the idea that more engagement is needed and makes a case for more inclusion of the public in the dialogue on the use of CRISPR (or TALENs, etc.) in humans.